This is an opinionated guide for grasping the geography of Reykjavík, starting centrally and moving outwards to surrounding areas. 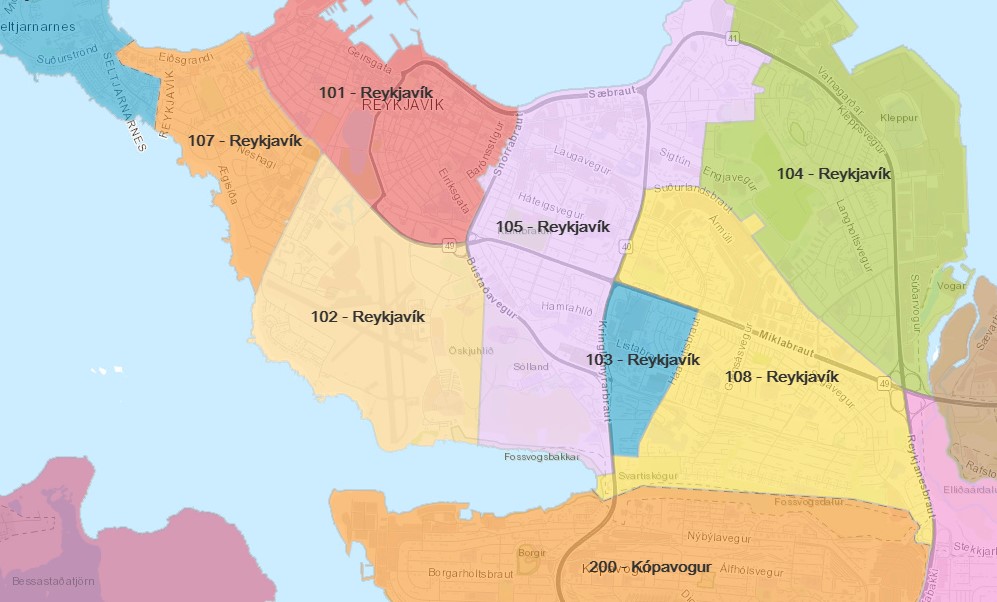 There is currently no official map of postal codes. This was taken from a post on DV.is which references a borken link on Posturinn.is.

As you can see from these maps, neighborhoods don’t map cleanly to postal codes. Nevertheless the neighboorhoods are frequently referred to by their primary postal codes.

Famously the domestic flights airport is located very centrally, spoiling valuable land that would otherwise help reduce the need for long travel. Its area has recently been given the 102 postcode. The future of this area has been a source of political contention, but very likely the airport will gradually make way for a future central neighbourhood with mixed housing.

Since the war period the capital area has sprawled out with a car centric plan, especially in surrounding municipalities. Only in the last 10 years or so have the regional plans called for more walkable patterns and mixed housing areas. The result is that only Vesturbær, Miðborg, Hlíðar, Laugardalur and some parts of Laugardalur are actually walkable and bike friendly.

This is the downtown area and „old town“. This is where service, cafes, clubs and restaurants are clustered.

This is by far the most touristy area with a density of high hotel and tourist accommodation.

On friday and saturday nights young Icelanders travel from all over the Capital Region to party in the clubs in and around Laugavegur/Bankastræti.

Has semi-walkable parts, the KR sports club and charming family housing. Not many offices. Has the University and Miðbær area in walking distance.

Landmarks: Vesturbæjarlaug (popular swimming pool) and a big part of the university campus.

Hlíðar to the east and Vesturbær to the west sandwich the Miðbær downtown area. Hlíðar also has primarily family housing. It is unfortunately cut up vertically with the Miklabraut highway bringing traffic from the capital area to the downtown area.

Laugardalur and Breiðholt are also interesting areas. Breiðholt was built with lots of social housing, but in quite a meaningful way that has evolved to be an interesting melting pot in its own right. Laugardalur has a huge pool park with a fitness center and spa, as well as the biggest sports venues.

Outside of these areas mentioned you basically have car centric sprawls and then the surrounding municipalities; Kópavogur then Garðabær then Hafnarförð to the south, Seltjarnarnes on the peninsula to the west and Grafarholt then Mosfellsbær in the north-east direction.